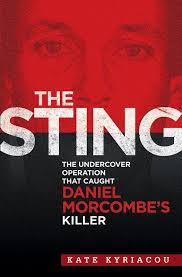 The story of the police sting that resulted in the confession of Daniel Morcombe’s killer reads like crime fiction. An elaborately staged fake crime gang, run by a ‘Mr Big’, that lured Brett Cowan in with the promise of a hefty payout. It was the stuff of a TV crime series rather than an Australian police operation. The Sting reveals extraordinary new detail and a shocking insight into one of the country’s most evil killers, and the operation that brought him down.

Go behind the scenes in one of Australia’s most sensational undercover busts, including never-before-heard detail of the covert investigation, including how Cowan was slowly brainwashed into believing ‘Mr Big’.

Read what Cowan’s family think of their black sheep.

The case of Daniel Morcombe shocked and changed our nation. Daniel’s disappearance, on a December day in 2003, followed ten years of searching for answers and eventually breakthrough in a conviction. Journalist Kate Kyriacou brings our attention to this groundbreaking case through her book, The Sting. In her book, Kyriacou outlines the dramatic and convoluted plan to elicit a confession and gain a resulting arrest for Daniel Morcombe’s unremorseful killer.

The Sting reads in parts. Firstly it gives the reader a solid background to Daniel Morcombe, his family, his personality traits and his movements on the day he disappeared. It goes into intense detail as to the timeline around Daniel’s disappearance and the exact circumstances that would bring his abduction to fruition. It provides us with a detailed profile of the killer, Brett Peter Cowan. Kyriacou leaves no stone unturned in The Sting, outlining Cowan’s family background, relationship history, employment and defining early years of crime. The latter half of the book concentrates on the detailed undercover operation nicknamed “The Sting”. This operation involved a dedicated team of police officers from numerous states (Queensland, WA and Vic). Together, they concocted an elaborate trap, involving fake crime figures sent to lure Cowan in, on the promise of cash remuneration for performing various crime tasks. It took months of careful planning to eventually draw out Cowan’s  confession and resulting arrest. What remains in this true crime novel, is the heartbreaking search for Daniel’s remains. The highly involving court process that ensured that Cowan was jailed for many years forms the final chapter of this heartbreaking book.

In some respects, The Sting is quite possibly the hardest book I have had to review. There was an uncomfortable feeling and a constant wave of sickness that fell over me while I read The Sting. Although I knew the final outcome of this case, the journey The Sting took me on was heart-wrenching, eye-opening and important process nevertheless.

The Sting is a well written and precise text. There is sharpness in Kyriacou’s style of writing that suited this book. The format was a little likes a crime fiction novel, the chapters were sufficient but somehow they got under your skin, urging you to read on. The Sting is unquestionably well researched, offering a comprehensive standpoint on one of Australia’s most high profile cases. In the places where it is needed, Kyriacou is sensitive to the issue at hand and balanced providing the reader with a basis to the operation with the background of Cowan but she never sought to glorify him. In her treatment of the Morcombe’s, Kyriacou is completely respectful. I hope this book works to continue to raise awareness for the essential work Bruce and Denise Morcombe have tirelessly devoted their lives to since Daniel’s death, which is raising community awareness of child safety measures.

The Sting by Kate Kyriacou was published on August 1st 2015 by Echo Publishing. Details on how to purchase the book can be found here.

One thought on “Book Review: The Sting by Kate Kyriacou”