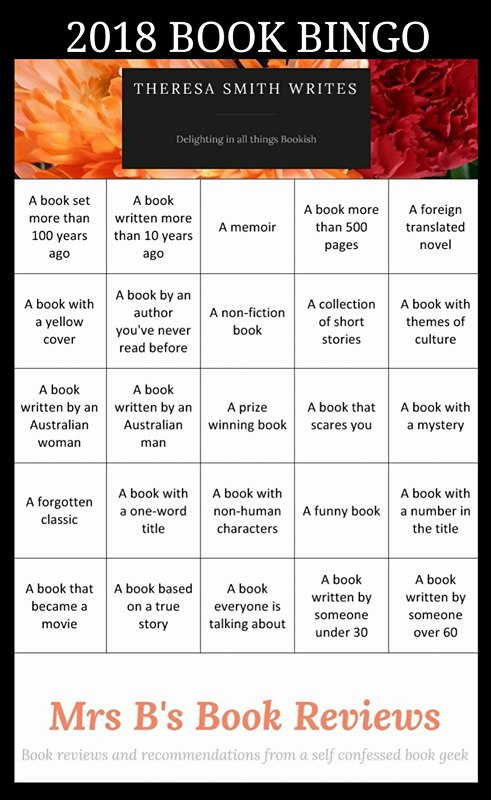 #Book Bingo 2018 is a collaboration challenge I am completing with my favourite blogger, Theresa Smith Writes. How does it work?  We have devised our own personalised book bingo card game. Twice a month, on the first and third Saturday of the month, Theresa and I will complete a book review post, outlining our respective bingo card entries. The book bingo card contains a total of 25 squares, which we will complete over the course of the year. To accommodate all the squares, we will be posting additional entries in the months of March and June, this will ensure that we stay on track to complete the book bingo by December. To keep things interesting for ourselves and those following along with us, the choice of bingo square to be covered will be entirely down to us. We invite you to join us in this fun book related challenge, by linking your bingo card entries in the comments section of this post or by visiting Theresa Smith Writes.

My first #Book Bingo 2018 entry is ‘A book based on a true story’. I have selected to read and review a very popular historical title, See What I Have Done. This novel is based on the Lizzie Borden case. In 1892, Lizzie was accused, but later acquitted of murdering her father and stepmother. Schmidt’s debut provides another take on this notorious true story.

In this riveting debut novel, See What I Have Done, Sarah Schmidt recasts one of the most fascinating murder cases of all time into an intimate story of a volatile household and a family devoid of love.

On the morning of August 4, 1892, Lizzie Borden calls out to her maid: Someone’s killed Father. The brutal ax-murder of Andrew and Abby Borden in their home in Fall River, Massachusetts, leaves little evidence and many unanswered questions. While neighbors struggle to understand why anyone would want to harm the respected Bordens, those close to the family have a different tale to tell—of a father with an explosive temper; a spiteful stepmother; and two spinster sisters, with a bond even stronger than blood, desperate for their independence.

As the police search for clues, Emma comforts an increasingly distraught Lizzie whose memories of that morning flash in scattered fragments. Had she been in the barn or the pear arbor to escape the stifling heat of the house? When did she last speak to her stepmother? Were they really gone and would everything be better now? Shifting among the perspectives of the unreliable Lizzie, her older sister Emma, the housemaid Bridget, and the enigmatic stranger Benjamin, the events of that fateful day are slowly revealed through a high-wire feat of storytelling.

Sarah Schmidt’s explosive 2017 debut, See What I Have Done, borders on a number of genres, from historical fiction, to true crime and a mystery novel. It seemed like the perfect choice for the category ‘a book based on a true story’ for the book bingo game I am completing this year. See What I Have Done is based on the real life unsolved case of the murders of Andrew Borden and his wife Abby, which took place over 100 years ago, in Massachusetts. Blame was cast on Lizzie Borden, Andrew’s youngest daughter and Abby’s stepdaughter. However, after being acquitted from these murders, the case has remained unsolved for over a century. Still it continues to fascinate the population, as much as it did all those years ago.

Sarah Schmidt’s first novel offers an alternative take on an age old murder case. Firstly, tying in the perspectives of four different narrators to unfurl the events leading up to, the day of the murders and after the murders was a fascinating angle. Schmidt does not attempt to give her final verdict on who was responsible for these horrific murders, she requires the reader to take an active role in her novel, considering all possibilities and potential suspects.

The infamous Lizzie Borden is cast in a critical eye by Schmidt. He voice is unreliable, immature and often scattered. It is hard to get directly inside Lizzie’s head, as her version of events is both very muddled and ambiguous. She deeply unsettled me and I felt there was just something off about her that I couldn’t quite put my finger on. Lizzie is not cast in a positive light in this novel and it is hard to develop a sense of empathy for this troubled young lady.

Lizzie’s voice is offset by the Irish maid of the household, Bridget. As Bridget is not one of the Borden family, we receive an outsider’s view of this complicated family. We also learn of Bridget’s plans to escape the oppressive Borden household, in the hope that she can return to Ireland. The placement of Bridget in the household at the time of the murders certainly provides a case for her possible involvement in this crime.

Alongside Lizzie Borden and housemaid Bridget’s viewpoints, are two other players. Emma is Lizzie’s older sister. Her back story involves a failed engagement and I found this a very interesting side addition to this narrative. Again, Emma is another character who I was never sure if I could trust completely. The final voice to form this full bodied narrative is that of Benjamin, a shady character linked to Lizzie and Emma’s uncle. He issues this case with another scenario, throwing even more suspicion into the mix.

Schmidt has an alluring style of writing. I was immediately hypnotized by her setting descriptions of the Borden household. Schmidt’s strength lies in her imagery. She engaged all my senses at some point in the novel. Some of these scenes had me physically gagging and I do admit to averting my eyes away from the gore of the murder scenes. However, there is a true brilliance to these descriptions and Schmidt’s ability to so successfully transport the reader to the horrific events of 1892, in Fall River.

See What I Have Done is a deeply claustrophobic novel that offers a chilling take on one of the most intriguing unsolved murder cases in our history books. It doesn’t attempt to give a final verdict on the perpetrator of this prolific crime, but the information presented allows the reader to make up their own mind. Schmidt certainly makes her presence known through her valiant debut, indicating she is an author who is capable of more great things.

See What I Have Done by Sarah Schmidt was published on March 28th 2017 by Hachette  Australia. Details on how to purchase the book can be found here.