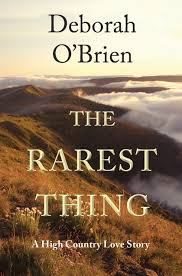 It’s 1966, and a mountain pygmy possum – a species that scientists considered to be long-extinct – is discovered in the Victorian High Country and transported to Melbourne where newspapers dub it ‘the world’s rarest creature’.

Thirty-year-old Dr Katharine Wynter is a palaeontologist who’s more comfortable with ancient bones than live human beings, particularly men – an exotic species of which she has little personal experience, apart from a predatory professor who has made her working life hell.

Having studied the tiny possum in fossil form, Katharine is curious to see it in the flesh, but her much anticipated visit is disrupted by the presence of wildlife photographer, Scott King, taking pictures for an international magazine.

Before long, Katharine finds herself thrown together with Scott on a quest to locate the miniature marsupials in their habitat – the rugged Australian Alps. Along the way, the timid scientist discovers a side to her character she never knew existed, while the dashing photographer abandons his bravado and confronts memories he’s hidden for decades.

As for the elusive possums, the cute little creatures lead their pursuers on a merry chase…

The discovery of the rare, considered extinct, mountain pygmy possum in the picturesque region of Victoria’s High Country, is the focus of Deborah O’Brien’s new book, The Rarest Thing.

The Rarest Thing features main female protagonist Katharine Wynter. Katharine is a woman ahead of her time. A deeply intelligent, talented and passionate thirty year old, palaeontologist Katharine finds herself in the Victoria High Country region, searching for the mountain pygmy possum in the flesh. Her trip to the snowy region allows for growth to both her career and personal life, as she connects with wildlife photographer Scott King during the expedition.  As the elusive marsupial gives it searchers a run for their money, Katharine and Scott are forced to confront their private thoughts and fears in the rugged Australian Alps.

Every now and then a book comes across your way that is so very special, you want to grasp onto it and not let go. I felt this way about The Rarest Thing by Deborah O’Brien. I feel very fortunate to have been provided with the opportunity to read and review this gentle gem of a novel. Deborah O’Brien is author who is familiar to me, I have read and respected her work for some years. When I was approached to review this book, I felt honoured.

What makes The Rarest Thing a standout book is number of factors. Firstly, the breathtaking cover, on the front, back and inside, which is the perfect metaphor for what is in store for the reader location wise. The setting descriptions blew me away, the prose is refined. The writing is so descriptive that the High Country of Victoria, to the University city based setting, leapt off the pages of this book and landed straight in my mind. The Rarest Thing also offers a strong sense of place. Although I did not personally experience the 1960’s, I felt I was there mind, body and soul, with Katharine through O’Brien’s skilled style of storytelling. I also felt emotionally drawn to the passages involving Katharine’s Father. He plays an important figure in her journey from a timid girl, to a powerful young woman, paving the way for female academics at the time. I wept as O’Brien described the return home and harrowing transformation Katharine’s Father makes, from being a handsome soldier, to a broken prisoner of war. It was simply unforgettable.  O’Brien’s ability to evoke a deep sense of place to her readers, extends through all aspects of her narrative. The book explores political activism in 1960’s Australia, the litany of social issues prevalent at this time, the emerging anti Vietnam War movements and the rise of feminism. Popular culture of the time also makes its presence known in The Rarest Thing.  Music, popular movies and cult figures of the time are mentioned briefly, all adding to the overall reading experience.

The focus on the mountain pygmy possum, a marsupial I did not know existed until I came across this book, was enlightening. Katherine and Scott’s quest to find the creature in the flesh is addictive and for me kept the pages turning. O’Brien’s narrative unfolds at the perfect pace, peeling off layer after layer, revealing secrets and story twists. At the heart of this book is a heartwarming romance and a drama that plays out, examining some pertinent issues, such as conservation and equal opportunity.

It is with great joy that I took an adventure with the characters in this book, to discover the hidden history of a marsupial threatened to the point of extinction.  The Rarest Thing is a passionately told, well researched novel and a story so beautifully woven that it deserves no less than a five star rating.

The Rarest Thing by Deborah O’Brien is to be published on November 1st 2016 by Lomandra Press. Details on how to purchase the book can be found here.

*I wish to thank the author, Deborah O’Brien, for providing me with a copy of this book in exchange for an honest review.

4 thoughts on “Book Review: The Rarest Thing by Deborah O’Brien”