Welcome to Tea with Mrs B, an author interview series. Here to share a pot of tea and to chat about her latest release, The Woman in the Green Dress, is Tea Cooper.

Tea is an award winning Australian author of historical fiction. In a past life she was a teacher, a journalist and a farmer. These days she haunts museums and indulges her passion for storytelling.

She is the bestselling author of several novels, including The Horse Thief, The Cedar Cutter, The Currency Lass, The Naturalist’s Daughter and The Woman in the Green Dress. Her next book, The Girl in the Painting, is scheduled for release at the end of 2019. She is currently working on her 2020 story, The Cartographer’s Secret.

Hello Tea. It is my pleasure to warmly welcome you to my blog, Mrs B’s Book Reviews. Thank you for joining me for Tea with Mrs B, an author interview series.  To set the mood for our tea infused interview, what is your preferred beverage, tea, coffee or other? And side accompaniment, scone, cake or other?

A flat white and a slice of that delicious orange and almond cake would set the mood perfectly!

The Woman in the Green Dress is my fifth full length Australian historical fiction. I have also written four shorter historicals that are published as e-books.

The Woman in the Green Dress was released late last year. Can you describe it in just a sentence?

It tells the story of two women whose lives are inextricably linked by a mystery surrounding an opal and a woman in a green dress.

What came first in the creation of the novel – the title, plot, characters or setting when you first set out to write The Woman in the Green Dress?

As with most of my books I stumbled across some facts and wove the story around them. Three facts inspired The Woman in the Green Dress: a line in the introduction to a nineteenth century journal, an advertisement for a shop owned by two women in George Street, Sydney in the 1850s and the fact that no one knows what happened to the first opal discovered by a European in Australia.

There are two different time periods featured in your book, was it a hard process to write and link them all together? Did you have a favourite?

I love writing dual-timelines! The Naturalist’s Daughter was my first, and The Woman in the Green Dress the second. I write the first draft of the two stories separately and then interweave them until the most dominant story takes over. Do I have a favourite? In this case, no … but I did have a favourite character and he spans both timelines.

What ingredients do you feel are necessary to compose a successful historical fiction based narrative?

I like to think that my stories, though fiction, are feasible and I believe that is essential. I also prefer not to put fictional words into the mouth of historical figures. The highlight of my life is when I see the word ‘unknown’. In the case of The Woman in the Green Dress an ‘unknown amanuensis’ transcribed the 19th century journal I mentioned. A ghost writer! The 1850s story centred around that character.

How long did it take you to write The Woman in the Green Dress?

It takes me about a year to write a full length historical but the ideas tend to float around for some time before.  I have a large blackboard in my study and it has three sections—the book I’m editing, the book I’m writing and ‘mad plans and clever tricks’ which, more often than not, become the next book!

Can you tell us about the research process to bring The Woman in the Green Dress to life? How did you incorporate this research into the narrative?

I had my three facts — the ghost writer, the shop and the missing opal then I delved deeper. I obviously read the journal. (The translation, the original is held in The Mitchell.) It was written by an Austrian army officer Baron von Hügel who visited ‘New Holland’ between 1833 and 1834. I pursued my ongoing fascination with taxidermy and women in business in Sydney in the mid 19th century and I read everything I could lay my hands on about the history of opals and talked to many people in the industry.

Where did the inspiration for your characters come from?

Everyone around me, although none of my characters are based on one person. I take a little bit from here and a little bit from there, pieces of a jigsaw puzzle that grow and build to the final picture although I have been known to borrow names!

Can you tell us more about the Australian setting locations featured in The Woman in the Green Dress?

All my books are primarily set in the Hunter Valley where I live, the old County of Northumberland—the area bounded by the Hawkesbury River to the south, the MacDonald river to the south-west and the Hunter River to the north—with an occasional trip to Sydney. It means I can walk the paths my characters walk, find the very house they may have lived in, and immerse myself in their world.

What do you hope readers will take away from reading The Woman in the Green Dress?

I hope I can share my fascination with some of the less known facts of Australia history and allow the reader to envisage the life their ancestors may have experienced. And also illustrate how the past may influence the present.

How has your writing evolved since your first published novel?

My first published novel was a contemporary romance, my second a historical, Lily’s Leap, and although I wrote another couple of contemporaries historicals seemed to be a more natural fit, and the research-sleuthing fascinates me. I’ve also turned to dual-timelines but I believe that is a story by story decision.

I live in the middle of a one-hundred-acre bush block just outside a small village that time forgot and although I have a dedicated study, and a room that has become ‘The Library’ (actually an excuse to leave research books lying all over the place until the story is finished) I often work outside, sometimes at a table, sometimes under as tree or perched on one of the huge sandstone rocks guarding the house. (Think Picnic at Hanging Rock!) My current writing partner is a six-foot goanna who seems to be lulled by the tapping of my computer keys.

What is next on the horizon for Tea Cooper? Do you have any writing projects you would like to share with us?

I have submitted my December 2019 book to my publisher—working title The Girl in the Painting and I’ve just started writing what I hope will be my 2020 release—The Cartographer’s Secret (again, a working title).

What 2019 book releases are you most excited to read?

I have already read it! I’m absolutely smitten by The Binding by Bridget Collins and to be honest I’m not sure what is next. Currently I’m buried in non-fiction—more 19th century journals and a lot about the history of cartography—while I wait for Margaret Atwood’s new book, The Testaments.

Too boring, I’m afraid! 19th century Europe and Australia then I could track down the true stories behind some of these unknown facts I love so much!

I won’t be sharing a pot of tea but I have been lucky enough to snag a ticket to hear Margaret Atwood speak at the Opera House. She would be my first choice.

Thank you for taking the time to visit Mrs B’s Book Reviews for Tea with Mrs B Tea.  Congratulations on the publication of The Woman in the Green Dress! 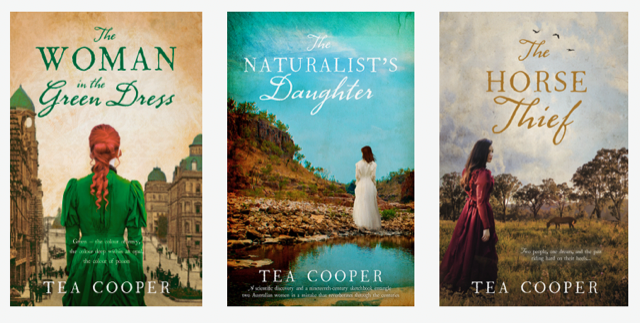 For readers who loved Remarkable Creatures, The Naturalist’s Daughter and The

Birdman’s Wife comes The Woman in the Green Dress…

Della Atterton, bereft at the loss of her parents, is holed up in the place she loves best: the beautiful Hawkesbury in New South Wales. Happiest following the trade her father taught her, taxidermy, Della has no wish to return to Sydney. But the unexpected arrival of Captain Stefan von Richter on a quest to retrieve what could be Australia’s first opal, precipitates Della’s return to Sydney and her Curio Shop of Wonders, where she discovers her enigmatic aunt, Cordelia, is selling more than curiosities to collectors. Strange things are afoot and Della, a fly in a spider’s web, is caught up in events with unimaginable consequences…

When London teashop waitress Fleur Richards inherits land and wealth in Australia from her husband, Hugh, killed in the war, she wants nothing to do with it. After all, accepting it will mean Hugh really is dead. But Hugh’s lawyer is insistent, and so she finds herself ensconced in the Berkeley Hotel on Bent St, Sydney, the reluctant owner of a Hawkesbury property and an old curio shop, now desolate and boarded up.

As the real story of her inheritance unravels, Fleur finds herself in the company of a damaged returned soldier Kip, holding a thread that takes her deep into the past, a thread that could unravel a mystery surrounding an opal and a woman in a green dress; a green that is the colour of envy, the colour buried deep within an opal, the colour of poison…

The Woman in the Green Dress was published on 17th December 2018 by –  HQ Fiction AU. Details on how to purchase the book can be found here. 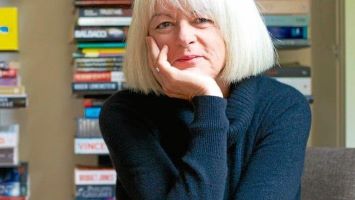 2 thoughts on “Tea with Mrs B: Tea Cooper”