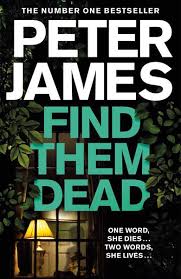 A Brighton gangster is on trial for conspiracy to murder, following the death of a rival crime family boss. As the jury file into Lewes Crown Court, twelve anonymous people selected randomly from fifty, there is one person sitting in the public gallery observing them with keen interest, and secretly filming them. Later, a group of the accused’s henchmen sit around a table with the full personal details of each of the twelve jurors in front of them. They need to influence two of them – a jury can convict if directed on a 10-2 majority verdict but no less. But which two?

When Roy Grace is called in to investigate a murder that has links to the accused and the trial, and the suspicion that an attempt has been made to intimidate jurors, he finds the reach and power of the accused’s tentacles go higher than he had ever imagined.

Find Them Dead is the latest novel by UK bestselling author Peter James. Dripping in mystery, suspense, thrills, twists and speculation, Find Them Dead delves right into the heart of a criminal network, with surprising results.
Find Them Dead sees the return of Detective Superintendent Roy Grace, who has just completed a posting at the London Met Police. Back in Brighton, Roy and his team are faced with the difficult task of breaking a drug smuggling operation that is run and operated by greedy but seemingly professional law abiding citizens.
When the finger is pointed at certain suspects any level trust and loyalty is quickly forgotten. The trial that follows of the main suspect sees the lives of the jurors put at extreme risk, as the accused’s gang plot to influence the jury. It is up to Roy Grace to bring these powerful and underhanded individuals to justice.
Peter James’s research of police operations is thorough which helps to bring all aspects of his novels alive and Find Them Dead is no exception to James’ previous books. James is easily is one of my favourite authors, with each book being a page turner, including this latest release. Another five stars for Peter James.

Find Them Dead by Peter James was published on 12th May 2020 by Pan Macmillan. Details on how to purchase the book can be found here.

To learn more about the author of Find Them Dead, Peter James, visit here.