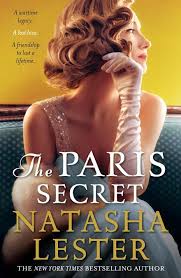 A wardrobe of Dior gowns, a secret kept for sixty-five years, and the three women bound forever by war… from the New York Times bestselling author of THE FRENCH PHOTOGRAPHER.

Paris, 1947 Designer Christian Dior unveils his extravagant first collection to a world weary of war and grief. He names his debut fragrance, Miss Dior, in tribute to his sister, Catherine, who worked for the French Resistance.

Present day Australian fashion conservator Kat Jourdan discovers a secret wardrobe filled with priceless Dior gowns in her grandmother’s vacant cottage. As she delves into the mystery, Kat begins to doubt everything she thought she knew about her beloved grandmother.

An unspeakable betrayal will entwine all of their fates.

THE PARIS SECRET is an unforgettable story about the lengths people go to protect one another, and a love that, despite everything, lasts a lifetime.

There is a lot a praise attached to Natasha Lester’s work from the media and publishing industry. It is all warranted, as somehow Lester has managed to produce a novel that tops her previous books, which have all been absolutely outstanding. The Paris Secret is imperial!

Natasha Lester’s latest is a story of war, love, survival, fashion, friendship and above all, secrets. Much of the action is based during the World War II, involving a fearless young woman named Skye Penrose. Skye is recruited to support the war effort as a female pilot, as part of an exclusive branch directly supporting the RAF.  Joining Skye in contributing to the war effort is her childhood friend Nicholas Crawford and her difficult sister Liberty. Tensions arise as these figures fight to survive during these perilous times. The Paris Secret also situates the reader in post war times. During this time frame the emphasis is on fashion, via the fascinating history of one of the world’s most respected designers, Christin Dior. As many countries found themselves exhausted by the war, Christian Dior was beginning to delight shoppers around the world with his gowns and a new fragrance line. But a tragic history involving Christian Dior’s dear sister Catherine, whom he named the perfume Miss Dior after, reveals itself. Finally, The Paris Secret travels forward in time to 2012, as we are acquainted with a successful Australian fashion conservator. When Kat Jourdan uncovers a secret stash of Dior gowns at her grandmother’s cottage, she becomes enraptured in a family mystery involving closely guarded secrets held by her grandmother. Natasha Lester’s brand new offering is timeless, heartbreaking, revealing and effecting.

Natasha Lester includes all the things I love when I am selecting the perfect book to read. When I was searching for an ideal Mother’s Day read I knew that Natasha Lester was not going to disappoint. She absolutely dazzled. I loved the multiple time frame approach, along with the combination of themes presented in The Paris Secret. Natasha Lester’s latest release incorporates the war, the Holocaust, female air pilots, spies, the resistance, fashion, love, secrets and so much more. To say I adored this novel is an understatement, I worshipped The Paris Secret.

Lester introduces us to quite an amazing cast. A discussion of the character set must begin with Skye, our central guide for the war sequences. I don’t know where to begin with Skye, but what I can tell you is that I loved her. Skye is fascinating, brave, fearless, admirable, stoic and genuine. I really enjoyed following her journey, through the bright times and the plunging dark times. Along with Skye we have Liberty, who is Skye’s estranged sister. What a piece of work this character was, but Liberty provides plenty of colour, as well as tension to the narrative. Then there are Skye’s colleagues and friends, who she encounters during her war time escapades. A particular standout was Nicholas, Skye’s love interest and childhood confidante. I loved the interactions between Skye and the characters I have outlined above.  We also have Christian Dior, in the post war time frame and the links to his brave sister, who are perfectly placed on the pages of this novel. Finally, the present day characters have a strong role to play in the proceedings of The Paris Secret. Kat Jourdan was simply fantastic, I loved her approach. Likewise, Elliot was a great addition to the novel. Finally, Kat’s grandmother added an essential air of intrigue to this novel as a whole.

In terms of the setting, Lester has absolutely nailed it. I urge you to take the time to read through the eight page Author’s Note contained at the end of the book. It provides concrete evidence of Lester’s efforts to achieve a high level of authenticity and historical accuracy in The Paris Secret. It truly is outstanding. Lester’s knowledge and passion for her subject matter is infectious. I certainly learned a great deal more about yet another unknown cavity of women’s history and the war effort. The sequences involving Skye’s work with the Air Transport Auxiliary Service was riveting and exciting. Likewise, the spy based sections and the resistance links provided knife edge based narrative episodes. While the heartbreaking focus on the concentration camp sequences exposed me to more untold information about life, death, survival and liberation from these horrific holes in history. When we make it back to the present day sequences, I was reminded about how much I loved the Cornwall region. The spectacle offered by this picturesque British locale was a joy to read. I enjoyed meeting Kat, Elliot and Kat’s grandmother in the present day areas of the narrative.

In The Paris Secret there is a splash of romance for readers to revel in. I loved the nostalgic, old fashioned courting sequences involving the World War II cast. Lester fills this section of the book with moments of loyalty, friendship, joy and elation, but also crushing heartbreak. There are plenty of obstacles for the characters to negotiate and the tension level in the love stakes is set to a high bar.  As for the present day protagonists, they also get their fair share of love and romance. I definitely warmed to these sequences, as much as the wartime love focal points.

Lester makes some wonderful links to fashion in The Paris Secret, with a focus on the world renowned designer Christian Dior. The hidden history involving Christian Dior and his sister during the war was mesmerizing. What a story to uncover! Lester is a fashion icon herself, as I have noted in her social media posts and it shines through this novel. Lester’s passion, as well as her insider knowledge of the world of Dior was remarkable. However, it was my inherent desire to discover the true identity of Kat’s grandmother and her past secrets that implored me to read The Paris Secret with a high level of enthusiasm. I was very touched by the end.

The Paris Secret by Natasha Lester is published by Hachette Australia on March 31st 2020. $32.99.

To learn more about the author of The Paris Secret, Natasha Lester, visit here.

*Thanks is extended to Hachette Australia for providing a free copy of this book for review purposes.