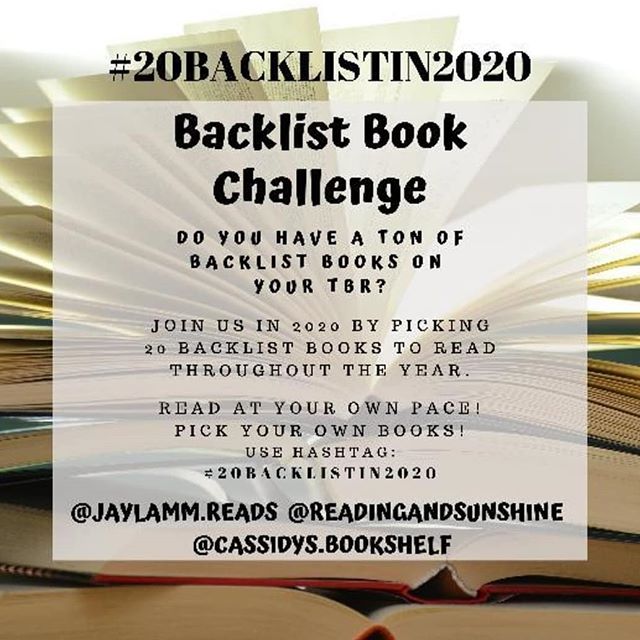 In a desperate bid to reduce the books that are collecting dust on my TBR shelves, I have decided to collaborate with another avid reader and fellow book reviewer, Nicole from Certified Book Addicts. The #20BACKLISTIN2020 challenge is a self paced challenge hosted by Jaylamm.Reads, Reading and Sunshine, and Cassidys.Bookshelf. The overall goal of this challenge is to read 20 titles from the backlist books that are currently sitting on your TBR pile. For this challenge I will be reading non review books and taking my selections directly from my chock-a-block TBR bookcases (there are two shelved back to back). I will be publishing my reviews of these books on my blog and social media sites on the first and third Tuesday of the month.

One morning while passing through Grand Central Terminal on her way to work, Grace Healey finds an abandoned suitcase tucked beneath a bench. Unable to resist her own curiosity, Grace opens the suitcase, where she discovers a dozen photographs-each of a different woman. In a moment of impulse, Grace takes the photographs and quickly leaves the station.

Grace soon learns that the suitcase belonged to a woman named Eleanor Trigg, leader of a network of female secret agents who were deployed out of London during the war. Twelve of these women were sent to Occupied Europe as couriers and radio operators to aid the resistance, but they never returned home, their fates a mystery. Setting out to learn the truth behind the women in the photographs, Grace finds herself drawn to a young mother turned agent named Marie, whose daring mission overseas reveals a remarkable story of friendship, valour and betrayal.

The runaway bestselling author of The Orphan’s Tale brings her awaiting audience a remarkable tale of three women bound by the ties of war, bravery and commitment. Pam Jenoff delves into the complicated and heart stopping world of female agents during the midst of World II in The Lost Girls of Paris. It is a story that will inspire and visibly move you, exposing a vital branch of the war that has not been advertised widely.

Beginning its journey in 1946 at the iconic Grand Central Station in New York, a young woman with a great deal of initiative comes upon an abandoned suitcase. Inside this suitcase she discovers a set of photographs of different women. Grace cannot resist this discovery and she tucks the photographs away for safekeeping. Grace’s inquisitive nature and desire to find the owner of the suitcase reveals a connection to a woman named Eleanor. It eventually comes to light that Eleanor was the leader of division of secret female agents in the war. This network was originally based in London, but their missions took them across occupied Europe, working undercover in various roles.  None of the women in the photographs ever made it home. Grace is determined to get the bottom of this intriguing story, but the deeper she digs, the more she learns about the bonds of friendship these women shared, along with their sheer bravery. The Lost Girls of Paris is a semi fictional story, that draws on real life events of World War II. This is the powerful story of the women we do not speak of – their actions have been swept under the carpet, but now they are given a chance to shine in The Lost Girls of Paris.

For over a decade now, I have read numerous books penned by historical fiction specialist Pam Jenoff. Many of these have been memorable books that have sat on my favourites list. I was excited to read The Lost Girls of Paris, as I always salute a new Pam Jenoff novel, especially one set in an era I look to with great interest. A like-minded book worm friend rated this one highly, so I was very keen to give it a whirl. I am just sorry that it languished a little too long on my shelves before I picked it up to read.

Initially, The Lost Girls of Paris grabbed my full and undivided attention. I loved the formative narrative device, the discovery of a mysterious suitcase, containing an intriguing set of photographs in busy Grand Central Station. I admired Grace, the 1946 leading character, for her brazen tenacity in picking up this suitcase and securing the set of photographs. It was an admirable, but also a risky move. This early segment of the novel really piqued my interest and I was keen to see how it would play out. Jenoff sets her novel up well, with a genuinely interesting dual narrative storyline, informed by historical fact. I was again reminded of how much I enjoy her writing style. I also appreciated the level of research she conducted to produce an authentic war time novel.

As the book began to progress, my interest level sadly began to wane. I did like Grace and I looked forward to her escapades. However, I didn’t seem to warm to the 1944 characters, which was a shame. The romance didn’t really hit the spot either, which may have saved this book.  I continued to fly through the pages in the hope that things would improve, but it didn’t.  I do want to stress that there are a great deal of five star and generous ratings for this book, including those by my friends, whose opinion I value. I have loved Jenoff’s work in the past and I will continue to seek out her upcoming releases, despite my issues with this book.

The Lost Girls of Paris presents an accessible historical fictional tale, loosely based on the efforts of Vera Atkins, and the band of women who served as agents for the largely unknown branch of the Special Operations Executive, during World War II. It is difficult not to appreciate, or get caught up in their story, which comes alive thanks to the efforts of historical fiction novelist Pam Jenoff.

The Lost Girls of Paris by Pam Jenoff was published on 18th February 2019 by HQ Fiction US. Details on how to purchase the book can be found here.

To learn more about the author of The Lost Girls of Paris, Pam Jenoff, visit here.