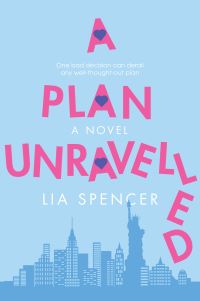 Ruby was only a child when she wrote out an ambitious plan:

Get an Acting Gig

She achieved it all by the age of 18. Fast forward fifteen years and Ruby’s hit rock bottom. She’s broke, unemployed, and in the tabloids for all the wrong reasons. Her reputation is in tatters and her career is on the line. Ruby’s publicist, Michelle, has a damage-control plan. She insists that Ruby move back to her lifeless, rural hometown in Australia to live with her dysfunctional family until the scathing headlines disappear and the scandal blows over. Despite her initial reluctance, Ruby quickly embraces the break from the bustling, cab-ridden concrete jungle. She indulges in carbs, spends quality time with her family, and reunites with her high school sweetheart. But when Ruby strikes up a romance with the mysterious guy next door, she is confronted with dirty secrets, hard truths, and is forced to make a choice   between a familiar past or an unchartered future.

And if Ruby’s learned anything from her mistake, it’s that one bad decision could instantly derail any well-thought-out plan.

‘My plan not only backfired, it exploded in a furious force of flames and burned to a crisp, leaving all my ambitions in a pile of ashes.’

Imagine if you had your whole life mapped out when you were just a child, for Ruby, this is exactly how it has been. With early ambitions to move to the big apple and forge an acting career , Ruby has set her goals sky high. At the age of just 18, Ruby has succeeded in achieving these goals, carving out an enviable life, far from her Australian roots. But fifteen years later, Ruby’s glittering days are numbered and when she takes a fall, it is quite spectacular.  Not only does she earn the criticism of the media, she is also jobless and financially strapped. Ruby’s publicist jumps in to save the day, suggesting that her client move back home until this run of bad publicity blows over. At first Ruby is hesitant to return home, but she soon realises it may be just the salvation she needs at this crucial time in her life. It seems once she is home, it isn’t so bad. Ruby reconnects with a high school love, reunites with her family and she enjoys the less pressured lifestyle of her celebrity world in New York. Romance also comes in the form of a handsome neighbour. Along the way, Ruby learns that love comes when you least expect it, while also facing the difficult truth of her past, as well as her future.

A Plan Unravelled was a fun, fresh and undemanding read. I whipped through this one in no time at all and I enjoyed reading Lia Spencer’s first book over a relaxing weekend.  A Plan Unravelled is a life affirming book, reminding the reader about the power of choices, decisions, plans, fate, the past and the future.

A Plan Unravelled is told from the singular perspective of Ruby, the lead. Ruby is a big character, full of ambition, drive and self-confidence. However, this all comes crashing down when Ruby makes a huge mistake and is literally crucified by the waiting media. It sends Ruby in a downward spiral and she subsequently loses her career, income and status. At times I didn’t warm to Ruby, I definitely felt our age gap and differing life situations. I felt Ruby was a little entitled, but she redeemed herself once she made the return home to Australia. Once Ruby sets foot on home soil the book changes direction. Initially Ruby feels quite sorry for herself, but gradually she takes steps to regain control over her life. A Plan Unravelled is definitely a character based novel, with the spotlight placed firmly on the heroine of this tale, Ruby.

Spencer does of a good job of outlining the supporting cast and the accompanying dialogue, which I found was both was authentic and intriguing. We witness plenty of twists and turns in Ruby’s life, which involve personal and professional figures in her life. There is a nice spot of romance to keep the reader entertained and I liked how this love story played out in the latter stages of the novel. It definitely helped me to see that Ruby’s character had travelled full circle.

In terms of setting, Spencer devotes time in A Plan Unravelled to both Australia and the United States. She does a good job of illuminating both these locales. Vastly contrasted, we have the bright lights of New York, a place where dreams are made, but also crushed. While in Australia, we are presented with a wholesome rural setting. Ruby’s mining town home had a genuine small town feel, which I appreciated.

A Plan Unravelled provides the reader with a subtle reminder of the need to continue to believe in yourself in the face of adversity. It shows both the strength and vulnerability of us all, even those who have risen to stardom.  A story of reconnecting to your roots, finding love and regaining self-belief, A Plan Unravelled is an inviting new novel for fans of contemporary fiction.

A Plan Unravelled by Lia Spencer was published on July 1st 2019. Details on how to purchase the book can be found here.

To learn more about the author of  A Plan Unravelled, Lia Spencer, visit here.

*Thanks extended to the author, Lia Spencer, for providing a free copy of this book for review purposes.