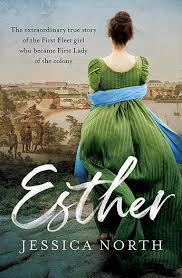 The little-known rags to riches love story of a convict girl who arrived in Australia on the First Fleet. Much like another, better-known colonial woman, Elizabeth Macarthur, Esther successfully managed her husband’s property and became a significant figure in the new colony.

Esther only just escaped the hangman in London. Aged 16, she stood trial at the Old Bailey for stealing 24 yards of black silk lace. Her sentence was transportation to the other side of the world.

She embarked on the perilous journey on the First Fleet as a convict, with no idea of what lay ahead. Once on shore, she became the servant and, in time, the lover of the dashing young first lieutenant George Johnston. But life in the fledgling colony could be gruelling, with starvation looming and lashings for convicts who stepped out of line.

Esther was one of the first Jewish women to arrive in the new land. Through her we meet some of the key people who helped shape the nation. Her life is an extraordinary rags-to-riches story. As leader of the Rum Rebellion against Governor Bligh, George Johnston became Lieutenant-Governor of NSW, making Esther First Lady of the colony, a remarkable rise in society for a former convict.

‘People make history. And it is not until we get to know the people behind the historic events that we really understand what they were all about.’

Esther is the culmination of ten years of dedicated research. Author Jessica North poured over hundreds of diaries, letters, books, records, maps and journals to produce her first book. This rich historical biography tells the story of one of Australia’s pioneers, a woman destined for the hangman’s noose in Britain, but saved by the olive branch of a new life in the penal colony of Australia. From a convict to a prominent landowner, Esther rose above her position and triumphed in her new nation.

Jessica North has brought to life the incredible story of Esther, in her debut biography. Beginning with Esther’s conviction for stealing at the age just 16, in the renowned Old Bailey, in the year 1786, we learn how Esther’s life was saved by an alternative sentence to hanging – transportation to the new colony of Australia. Esther’s journey to the new colony of Australia was eventful and dangerous, made even harder by the fact that Esther also had her young baby daughter in tow. The transportation ship was no place for a young babe in arms. However, by a miracle or pure determination, Esther survives, along with her child. Soon after disembarking the ship, Esther lands a position as a servant and eventually a lover to a prominent figure in the colony, Lieutenant George Johnston. However, in the very early days of the establishment of the colony, life was incredibly harsh. Esther must do all she can in order to preserve her own life and that of her young daughter. Esther’s rise from a convict to a prosperous woman of the colony is outlined by Jessica North with care and insight. Along the way we learn about the life and hard times of other prominent figures that touched Esther’s life and that of our nation.

I really love biographies such as Esther by Jessica North.  These books go such a long way in filling in the gaps where history lessons have been unable to cover key figures such as Esther, the main subject of this new biography. As a proud Australian, I am always keen to discover unknown nuggets of our nation’s history. I do feel like we owe it to our brave pioneers of yesteryear, to appreciate the hard yards they went to in order to establish our nation.

I am familiar with a few convict stories, courtesy of my education and some wider reading. However, Esther is a new name and figure to me. I am extremely grateful to the author of this biography, Jessica North, for drawing our attention to this remarkable woman. Structuring the book in the form of date by date and year after year key events helps to resurrect Esther’s lost tale. Jessica North embarked on a decade of research in order to compose her book and this is evident not only in the book itself, but the extensive Epilogue, Acknowledgments, Notes on Esther, Chapter Notes and Select Bibliography.

Esther represents an untold history of a woman who lived a life beyond belief. She rose from the ashes and succeeded in making her mark on Australia’s history books. Esther’s life is one of hardship, setbacks, resilience, resourcefulness and pure grit. Esther’s life is relayed alongside the defining events of Australia’s first settlers, we get a strong insight into life in the penal colony. We learn about key historical events, influential figures and the regrettable relations between the colonists and the local indigenous people. It will break your heart at times, but most importantly,  it makes you value Australian life today.

The life of one of Australia’s most innovative, brave and determined early settlers is brought to life through the excellent penmanship of Jessica North. Authentic, riveting and inspiring, Esther is a sensational tribute to one of our nation’s leading female pioneers.

‘Esther looked again at the invitation. It occurred to her that her own life reflected that of the colony itself: a remarkable transformation from an inferior convict beginning, through drama and hardship, to finally achieving a position of respect.’

Esther by Jessica North was published on 1st April 2019 by Allen & Unwin. Details on how to purchase the book can be found here.

To learn more about the author of Esther, Jessica North, visit here.

*Thanks extended to Allen & Unwin for providing a free copy of this book for review purposes.

Esther is book #73 of the 2019 Australian Women Writers Challenge