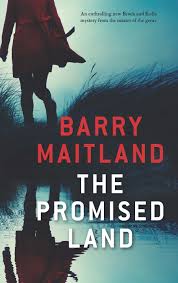 Brock and Kolla return in an enthralling new mystery from a master of the genre.

Newly promoted Detective Chief Inspector Kathy Kolla investigates a series of brutal murders on Hampstead Heath. Under intense pressure to find answers, she arrests the unlikely figure of Charles Pettigrew, a failing London publisher who lives alone on the edge of the Heath.

Pettigrew’s lawyer calls on recently retired David Brock for advice, and soon, unable to resist the pull of investigation, the old colleagues, Brock and Kolla, are at loggerheads.

At the heart of the gripping mystery of the Hampstead murders lies a manuscript of an unknown novel by one of the greatest literary figures of the twentieth century. Brock believes that its story will unlock the puzzle, but how?

The Canberra Times has dubbed Barry Maitland’s work, ‘among the best crime fiction being written today…’. I was keen to see for myself what this great series was all about. Despite entering into book thirteen of this well received and long running crime fiction series, The Promised Land morphed into a compulsive read from start to finish.

Crime busting duo Brock and Kolla are back for another round of murder investigation. Detective Kathy Kolla has recently been promoted to a Chief Inspector role. Meanwhile, David Brock is off the beat officially, but he comes in to help crack this difficult case. When a series of high-profile women are murdered around the area of Hampstead, pressure mounts to find the culprit of these murders. Suspicion is soon cast on a publishing identity, but the case proves to be much more complex than it first presents. With a mysterious and lucrative manuscript belonging to one of the literary world’s greatest writers is unearthed and consequently connected to these murders, the case becomes further complicated.

It is always a bit risky taking on a book to read that is part of an established and long running series. The Promised Land, the latest book by highly experienced crime fiction novelist Barry Maitland, is the thirteenth instalment in the Brock and Kolla series. I feel a little naive not knowing about this great series and crime fighting partnership.

The Promised Land is a book that can easily be read with or without  prior knowledge of the central characters, Brock and Kolla. However, for firm fans of this series, there is a nice balance between learning a little more about the personal lives of these detectives and filling in the gaps for newbies. Often with well established crime fiction series, you can feel a little out of the loop, this was not the case at all in The Promised Land.

One of my favourite aspects about The Promised Land was the central mystery concerning the case at hand. I was already intrigued by the work of a possible serial killer on the loose in Hampstead Heath, choosing high-profile women as victims. The police procedural details that go hand in hand with the process of solving this case was covered well by Maitland. This is good old-fashioned detective work and making decisions based on gut instincts – I loved it!

My favourite aspect of The Promised Land was the central case mystery. It concerns the existence of a manuscript thought to be the unpublished work of the great George Orwell. This book bounty is considered to be the missing link in a possible trilogy of books following Animal Farm and Nineteen Eighty-Four. The back story the runs through this narrative thread completely absorbed me, I wanted more! I also couldn’t help but liken the literary mystery in this book to the most recent news of a number of unpublished manuscripts in existence penned by the late J.D. Salinger of The Catcher in the Rye fame. Fascintating stuff!

There is a gritty realism to the content of The Promised Land and this extends to the characterisation. Brock and Kolla are incredibly well formed, we get to know their personality traits, quirks, their partnership and their misgivings. Maitland is also able to keep this well formed characterisation to his side characters. I admired Maitland’s craftmanship in his characters, this is obviously an area he is very comfortable with in his writing.

In terms of the mechanics of the case, this delivered on all fronts. The case was defined by some tricky police tactics, plenty of back to basics groundwork and the early identification of the suspect of this case made it seem all too easy to solve. However, the plot twists and the final results that eventuate from all the hard work is definitely worth it.

I have to agree with The Age. Brock and Kolla represent a pair of crime fiction’s finest. I am very glad to have made their acquaintance through the process of reading The Promised Land. Put this one on your radar if you are seeking a new crime fiction series to commit to, or you enjoy the chase of police procedurals. This one will not let you down.

The Promised Land by Barry Maitland was published on 7th January 2019 by Allen & Unwin. Details on how to purchase the book can be found here.

To learn more about the author of The Promised Land, Barry Maitland, visit here.

*I wish to thank Allen & Unwin for providing me with a free copy of this book for review purposes.

One thought on “New Release Book Review: The Promised Land by Barry Maitland”