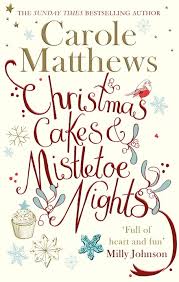 Fay and Danny are madly in love and it’s all Fay’s ever dreamed of. But she left everything – including the delightful cake shop she used to run – to be with Danny on his cosy canal boat The Dreamcatcher. And as she soon finds out, making delicious cakes on the water isn’t always smooth sailing!

Then Fay gets a call that sends her back to where it all began; back to where she first met Danny, back to her friends and the Cake Shop in the Garden. Even as Fay happily returns to dry land and her passion for baking, she knows it will be hard being away from Danny, especially with Christmas round the corner. But their relationship is strong enough to survive . . . isn’t it?

Can Fay really get everything she ever wanted in Christmas Cakes and Mistletoe Nights?

It wouldn’t be that most wonderful time of year without a new novel from beloved British author, Carole Matthews. This year Matthews brings us Christmas Cakes and Mistletoe Nights, the sequel to her popular The Cake Shop In The Garden. While it is always ideal to read the prequel, this can be read as a stand-alone as Matthews provides just the right amount of background information for new readers. While it’s difficult to imagine a freezing cold Christmas that brings snow in Australia, Matthews provides British escapism from those hot summer nights in her latest offering. Inspired by friends of Matthews who own a narrow boat on the Grand Union Canal in the Costa del Keynes, it’s a welcome return for fans of Fay Merryweather and Danny Wilde.

Traversing the Shropshire Union Canal in the run up to Christmas on the The Dreamcatcher is the dream life for this perfect couple. Loved up and working ad hoc, the pair have been able to escape the harsh reality of  life since selling The Cake Shop In The Garden to Laja. Fay is still the optimistic 42 year old woman who cannot believe her luck in landing 32 year old Danny since her long term relationship with the wrong man ended. Danny is still the loving man who wants to make Fay the happiest woman on earth. That is, until they receive a call from the new cake shop owner, Lija, with bad news. The illness of a good friend sends Fay and Danny back home to where their romance began, where tough choices, both personally and professionally, will need to be made.

Being back home is bittersweet for Faye and a chance for readers, both old and new, to reaquaint themselves with Lija, Stan and Edie, and meet the latest member of the group, Rainbow. Lija continues to be straightforward and blunt to the point of hilarity. To be this honest is a trait I admire. Seventeen year old Rainbow is the perfect foil to Lija and the ideal name for a colourful character who works in the The Cake Shop In The Garden as the front staff. She is both loud and caring, hardworking and loyal, yet surprisingly naive for a teenage girl on the cusp on womanhood. Rainbow brings both youth and levity to the trying situation that the cake shop owner will find herself in.

At ninety plus years old, Stan continues to provide gentle wisdom and insight when it is much needed. It was beautiful to witness this motley group come together in both Stan’s and Lija’s hour of need, proving that family is about much more than blood. Matthews highlights how people can come together to care for the elderly and the experiences they have to share with society. Edie, Fay’s sister, is proof that blood is not always thicker then water. The total opposite to Fay, she is a city chic who values materialism over happiness and family, making many unwise choices in her life that finally leads Fay to cut her out of her life. The truth of Edie’s situation will be both familiar and sad to many readers as she tries to reconcile with her sister before that magical time of year.

With a cast of unique characters and enough disasters to sink a boat, Christmas Cakes and Mistletoe Nights is the shining light that will get you through your own Christmas!

Christmas Cakes and Mistletoe Nights by Carole Matthews is published by Hachette Australia. Out now. $19.99

To learn more about the author of Christmas Cakes and Mistletoe Nights, Carole Matthews, visit here.