Title: The Killing of Louisa 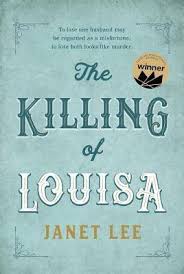 To lose one husband may be regarded as a misfortune; to lose both looks like murder.

In New South Wales in 1888, Louisa Collins was sentenced to hang after being tried multiple times for the alleged murders of her two husbands. The testimony of her young daughter helped to decide her fate.

This clever and compelling novel recreates Louisa’s time in her Darlinghurst prison cell as she reflects on her life and on the grief and loss that delivered her to this place. Despite difficult marriages, financial hardship and the deaths of several children, she remains resilient and determined to have her own identity.

But as she faces her final days, will Louisa confess to her crimes? Or is an innocent woman about to be hanged?

Let Louisa Collins, the last woman hanged in NSW speak to you from the grave, as she provides a firsthand account of her notorious life and times, through the expert workmanship of author Janet Lee. The Killing of Louisa is a careful and thoroughly researched historical reconstruction of a woman who was a sadly a product of the era in which she was situated. Tried four times for the death of her two husbands, resulting in hung juries and eventually a guilty verdict, Louisa’s final fate was a sad and sorry state of affairs. This is a vivid account that touches on not only Louisa’s life, but it also provides a solid sketch of Australian society, our law system, class and gender relations in the 1800s.

Louisa’s story begins in 1888. Louisa is due to be hanged after a number of trials finally turn over a guilty verdict, charging Louisa for the death of her two husbands. The final nail in the coffin was Louisa’s ten year old daughter May who provided incriminating testimony to convict Louisa. As Louisa sits languishing in her Darlinghurst prison cell, awaiting her hanging, she begins to reflect on her life. Relaying her tale to a Prison Chaplain, Louisa provides vignettes on her life growing up as a child of a poor Australian family. We learn about Louisa’s lack of schooling, her life as domestic servant and her first marriage to a man fifteen years her senior, which was arranged by her parents when she was eighteen years old. Just like her early childhood, Louisa’s first marriage was a struggle. Louisa gave birth to child after child, the family struggled to make ends meet and feed every member of the family adequately. Despite this set back, Louisa is determined that the family will rise above their odds. With the help of a family business and a set of lodgers boarding with Louisa and her husband, Louisa worked hard to remain above water. However, Louisa’s fate is sealed when both her first and second husband die in suspicious circumstances. The Killing of Louisa covers Louisa’s fateful final days as she struggles to reconcile her conviction with her actions in the past.  It is a fine line between innocence and guilt in this perplexing Australian true crime.

A quick search of Louisa Collins revealed to me that the last woman hanged in NSW was known as the poisoner and a convicted murderer. Louisa was also given the name ‘Borgia of Botany’ by the Australian press at the time. It is a cruel and sad portrait of a woman who I believe after reading this informational historical account, was a product of the time in which she was tried. Louisa’s voice is a haunting one, reminding us of the position of women in Australian society in the late 1800s. Louisa was a poorly educated woman from a working class background, who married young and had nine children in close succession. Although the book does a very good job of helping us to see that Louisa was a victim of sorts, with a lack of control over her circumstances, her story is incredibly forceful. It reminds us that just a little over a century ago, women were suppressed and subjected to unreasonable laws. Louisa’s story will move you and upset you. I know I felt quite emotional about her case, especially her final moments, which was utterly degrading.

I cannot fault the research level of the author Janet Lee, she is amazing. Janet Lee manages to balance a compelling first person narrative and flashbacks, with a breathtaking present time storyline. I also appreciated the careful insertion of newspaper clippings of the time that work to further outline the developments in Louisa’s case. Prior to reading this novel, I possessed only a small amount of information on this particular case, but the way in which The Killing of Louisa is structured, the book brings it all to life before your eyes, it is very vivid and utterly devastating. Louisa Collins has been the subject of a few written accounts, of which I am yet to explore. However, I feel The Killing of Louisa is a highly readable, as well as accessible account of a woman who is a fascinating subject from our history books.

Like Alias Grace penned by Margaret Atwood, Janet Lee is deliberate in her efforts to provide a comprehensive account of a woman connected to a case that is very complex and circumstantial. It is difficult to ascertain as to whether or not Louisa Collins was a victim or a perpetrator of the murder of her two husbands. I am convinced after reading this historical reconstruction that Louisa was simply a sad product of Australian society in the 1800s. Either way you view it, The Killing of Louisa is a powerful historical reconstruction and a solid debut novel.

The Killing of Louisa  by Janet Lee was published on 3rd September 2018 by UQP. Details on how to purchase the book can be found here.

The Killing of Louisa is book #142 of the Australian Women Writers Challenge.