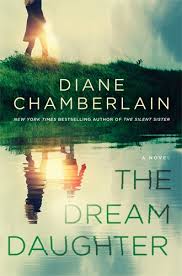 When Caroline Sears receives the news that her unborn baby girl has a heart defect, she is devastated. It is 1970 and there seems to be little that can be done. But her brother-in-law, a physicist, tells her that perhaps there is. Hunter appeared in their lives just a few years before—and his appearance was as mysterious as his past. With no family, no friends, and a background shrouded in secrets, Hunter embraced the Sears family and never looked back.

And all for the love of her unborn child.

The Dream Daughter sees Diane Chamberlain push the boundaries to deliver a novel that you will never forget.

The Dream Daughter revolves around the life of Caroline (Carly) Sears. The Dream Daughter is set in 1970 and when we meet Carly she is pregnant with a baby girl who sadly has a heart defect. In this not too distant past, we learn that there were little interventions in the form of heart surgery for unborn children. Supporting Carly through this tragic crisis is her sister Patti and her sister’s mysterious husband Hunter. Carly’s unborn child is considered even more special, as the child is the only legacy Carly has left of her husband, who lost his life in the Vietnam War. When Hunter suggests a ludicrous and unfathomable solution to solve Carly’s concerns about her child, Carly initially thinks Hunter is crazy. On closer thought, Carly decides she is willing to risk it all in order to save her child and give her the life she deserves.

Wow, The Dream Daughter was one shocking and surprising novel! The blurb gives the reader absolutely no indication of the direction this book is going (I can’t decide if the synopsis was good or not). I think if I was aware of the genre this book ended up taking and the issues it explored, I honestly don’t think I would have read it. I am aware that I am skirting around an issue and not telling you outright, but there is a major spoiler if I discuss this aspect of the book any further. I accidentally told another book friend this spoiler, but I am conscious of not doing it again to my followers!

So what can I discuss? Well, I can tell you that if you are a fan of Diane Chamberlain’s work, she does take a step away from her usual fare, which are novels based around social or moral issues. There is still a sense of right and wrong in this novel. There is also an opportunity to step into the shoes of Carly, the main protagonist and decide if you would go the extent Carly does to save her unborn child’s life. I’m still sitting on the fence on this one. I would imagine doing everything I could to save my children, especially with the loss of a husband weighing on my mind, but the whole scenario Carly puts herself through is simply mind boggling! This is a book that will keep your mind ticking over!

I loved the setting of The Dream Daughter. The majority of the action is set in Nags Head, North Carolina, which has a quaint southern feel. There are other sequences set in New York. I feel Chamberlain adequately captured the hustle and bustle of life in the city, as opposed to the more laid back southern region where Carly hails from. Chamberlain also does an excellent job of expanding her 1970s based setting. We receive an ideal picture of the political atmopshere, the impact of the Vietnam War, fashions, culture, customs, music and celebrities of the time. It was a nice trip down memory lane.

The characters that populate the pages of The Dream Daughter are fascinating set. I found I was able to connect with Carly, the lead and Hunter (I actually secretly wished they would get together). These two are enigmatic and really enable the novel to stand out. Alongside Carly and Hunter are family members and Hunter’s mother. This character didn’t quite gel with me and I did get cross with her more than once. But when you look deeper into this character she acted in that way for a reason. I apologise again if that sounds vague, but this character is connected to the spoiler issue with this book!

What a journey! The Dream Daughter is about time, family, faith, persistence, overcoming adversity, sacrifice, tough choices, risks and most importantly, a mother’s love. This alternative take on a mother’s love is very interesting and the concept that Diane Chamberlain floats around did require me to suspend a great deal of disbelief, which I did find taxing. I found myself questioning a few aspects of the novel, but I think in hindsight it is best to sit back, relax and let this book carry you away!

Although I lamented to a friend about the direction The Dream Daughter travelled, I will say this book had me intrigued. I was filled with an edgy sense of tension throughout the emotional journey it sends the reader on. It is good to see such a bestselling writer, with an obvious successful formula to her novels branch out, take chance and submit something a little different. I recommend The Dream Daughter to creative and imaginative readers, you need a big heart for this one.

The Dream Daughter by Diane Chamberlain was published on 9th October 2018 by Pan Macmillan. Details on how to purchase the book can be found here.

To learn more about the author of  The Dream Daughter, Diane Chamberlain visit here.