Sydney, 1938. After being hit by a car on Oxford Street, sixty-three-year-old Jean Ford lies in 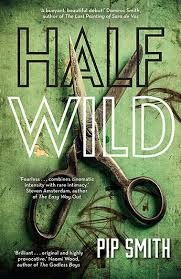 a coma in Sydney Hospital. Doctors talk across her body, nurses jab her in the arm with morphine, detectives arrive to take her fingerprints. She has £100 in her pocket, but no identification. Memories come back to her – a murder trial, a life in prison – but with each prick of the needle her memories begin to shift.

Wellington, 1885. Tally Ho doesn’t need to go to school because she is going to be a fisherman or a cart driver or a butcher boy like Harry Crawford. Wellington is her town and she makes up the rules. Papa takes her fishing, Nonno teaches her how to jump fences on his horse Geronimo – life gallops on the way it should, until a brother, baby William, is born. ‘Go and play with your sisters,’ Papa says, but wearing dresses and sipping tea is not the life for Tally Ho. Taking the advice of her hero, Harry Crawford, she runs away.

Sydney, 1917. The burned body of a woman is discovered on the banks of the Lane Cove River. Was she a mad woman? A drunk who’d accidentally set herself on fire? Nobody knows, until-three years later – a tailor’s apprentice tells police that his mother went missing that same weekend, and that his stepfather, Harry Crawford, is not who he seems to be. Who, then, is he?

Based on the true lives of Eugenia Falleni, Half Wild is Pip Smith’s dazzling debut novel.

With the stark and confronting front cover image of a sharp pair of scissors, accompanying a smattering of freshly snipped hair, the reader is immediately intrigued by Half Wild. Pip Smith’s debut makes quite the impression, is an intricately woven historical fiction come mystery novel, that has plenty to remark on in regards to identity, gender roles, acceptance and social codes in Australia in the early 1900’s. It uses a captivating subject, Eugenia Falleni, a woman posing as a transgender man, who becomes caught up in one of the most baffling murder cases in Sydney’s history.

Half Wild has been on my radar for quite a stretch of time. The positive reviews Half Wild has collected for over a year now convinced me to make room in my schedule to read this mesmerising novel. Historical fiction that is based on known fact is my preferred style of novel and Half Wild, being set in both New Zealand and Australia pleased me greatly. I always look forward to an author’s note contained at the back of book, it is sweetener when I have finished a really good book that I didn’t want to end. In Half Wild’s case, I loved discovering the reason why Pip Smith was inspired to write this book. Her trip to Sydney’s Justice and Police Museum, which at the time of Smith’s visit in 2005, an exhibition of City of Shadows was being held, which presented police photographs of subjects from the early twentieth century. One mug shot stood out for the author of Half Wild, Pip Smith, that of the haunted image of Harry Crawford, a hotel cleaner, arrested for the murder of his wife three years earlier. Harry is in fact Eugenia Falleni, both a wife and mother, who had been passing herself off as a man since 1889. What fascinating ground to base a novel on!

Pip Smith takes an alternative route to format to her story. The book is divided into parts, ranging from Eugenia’s life in early New Zealand as a child, through to her passage and new life in Sydney, through to the murder trial and eventual final moments of life as ‘Jean Ford’. Filtered through these parts are the voices of many characters that have a part to play in Eugenia’s life at some stage. It is a little hard at times to grasp all these voices, but the persistence is well worth your time. Along with this vast array of character figures is the inclusion of pertinent fragments of literature that give further shading to Eugenia’s colourful life. These include press reports, court proceedings, sketches and photographs. Each medium adds another layer to this intriguing tale.

Throughout Half Wild I felt incredibly curious about Eugenia. This curiosity factor, along with the central mystery over whether Eugenia killed her wife or not, enticed me to stay with this book until the bitter end. The overwhelming puzzle as to how Eugenia fooled so many, especially those close to her into believing she was in fact a man, draws the reader further into Half Wild. For me personally, the highlight of this tale was the early sequences detailing Eugenia’s formative years in New Zealand. I appreciated gaining a glimpse into early settlement life in New Zealand, the migrant experience and the early struggles Eugenia had with her identity confusion. The prose in this area was delicate and enlightening.

Much praise must be directed Pip Smith’s way for composing such a stand out piece of historical and literary fiction. The research is faultless, the approach passionate and the story that emerges is a remarkable commentary on gender, identity, acceptance and belonging. The vivid reproduction of early Sydney alone makes Half Wild something incredibly special. Half Wild is a book that will hold expansive appeal and it comes with a full endorsement from this reader.

Half Wild by Pip Smith  was published on 28th June 2017 by Allen & Unwin. Details on how to purchase the book can be found here.

Learn more about the author of Half Wild, Pip Smith here.

Half Wild, is book #126 of the Australian Women Writers Challenge