WHO REALLY KILLED THE HADLER FAMILY? 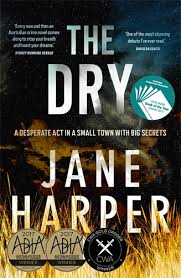 It hasn’t rained in Kiewarra for two years. Tensions in the farming community become unbearable when three members of the Hadler family are discovered shot to death on their property. Everyone assumes Luke Hadler committed suicide after slaughtering his wife and six-year-old son.

Federal Police investigator Aaron Falk returns to his hometown for the funerals and is unwillingly drawn into the investigation. As suspicion spreads through the town, Falk is forced to confront the community that rejected him twenty years earlier. Because Falk and his childhood friend Luke Hadler shared a secret, one which Luke’s death threatens to unearth …

The Dry is the stunning debut novel by Aussie author, Jane Harper. Set in outback Australia, it is the first in the Detective Aaron Falk series. With the second book out and a third to come soon, I knew it was time to see what all the fuss was about! From the very beginning, the most important aspect for me was that this story is current. It sensitively and honestly dealt with a variety of issues for modern rural farmers, the most prominent being the drought. My eyes were opened to the plight of struggling farmers Australia wide. The environment Jane creates is one high in tension and instability as she brings Aaron back home after 20 years for a funeral. From here, things quickly escalate when it appears that the death of long time friend, Luke, is not as cut and dried as it first appears to be. Reluctant to investigate further, Aaron finds that the past and the present are more interconnected then he could ever imagine. To solve the present case, Aaron must unravel a childhood mystery once and for all that a small town has never recovered from.

The Dry by Jane Harper was published on 31st May 2016 by Pan Macmillan. Details on how to purchase the book can be found here.

To learn more about the author of The Dry, Jane Harper here.