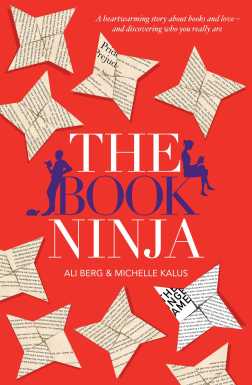 Sometimes love means having to broaden your literary horizons

Frankie Rose is desperate for love. Or a relationship. Or just a date with a semi-normal person will do.

It’s not that she hasn’t tried. She’s the queen of online dating. But enough is enough. Inspired by her job at The Little Brunswick Street Bookshop, Frankie decides to take fate into her own hands and embarks on the ultimate love experiment.

Her plan? Plant her favourite books on trains inscribed with her contact details in a bid to lure the sophisticated, charming and well-read man of her dreams.

Enter Sunny, and one spontaneous kiss later, Frankie begins to fall for him. But there’s just one problem – Frankie is strictly a classics kind of gal, and Sunny is really into Young Adult. Like really.

A clever, funny and wryly observed story about books and discovering who you really are.

From the Aussie duo Ali Berg and Michelle Kalus comes the entertaining chic lit debut
novel, The Book Ninja. The Book Ninja is based on the Melbourne movement that both Ali and Michelle began ….leaving books on a train for others to read! With fiction mirroring real life, the authors set their novel in Melbourne. Told in the third person, the protagonist is 30 year old Frankie Rose, whose first love is books. Frankie has every bookworms dream job of working alongside her bestie Cat in an independent bookshop, owned by Cat’s husband. Their love of reading really shone through with many literary references sprinkled throughout the novel, from the classics to Young Adult. Some I recognised, others I didn’t but that didn’t matter. I absolutely adored both Cat and her husband, Claud, who were expecting their first child. Between the three of them, Cat is the impetuous one with many crazy ideas but holds a secret close to her heart. Her husband has the most hilarious hobby for a man that had me constantly giggling whenever it was mentioned. Claud though, had an unexpectedly tender
side I didn’t see. At 30 years old, Frankie herself is now looking for the man who is the love of her life. Unable to meet him, Frankie decides to leave her favourite books on trains with a message inside. What follows is a hilarious number of dates that Frankie chronicles through blogs that are at the start of each chapter. While I did enjoy reading the blogs, I felt they lacked detail. Writing about Frankie’s adventures in a novel structure would have allowed for further exploration. Frankie herself was a delight and in many ways the opposite of Cat, making them a good team as their life took some zany twists and turns. The Book Ninja is a one that lovers of reading need to put at the top of their list!

The Book Ninja by Ali Berg and Michelle Kalus was published on 1st June 2018 by Simon & Schuster Australia. Details on how to purchase the book can be found here.

To learn more about the authors of The Book Ninja, Ali Berg and Michelle Kalus visit here.