Book Broadcast is a post I have created to help ease the load of the books I have for review. It is a great way to spread the word, providing recognition to an author or publisher for sending me a book to review. As my reviewing and blogging duties have stepped up a notch in the last year, I don’t often have the time to complete an in depth review. I hope you can discover some new titles to read through this regular book post.

You told each other everything. Then she told you too much. 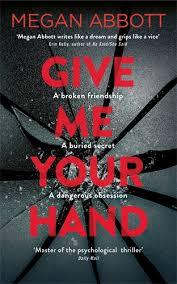 Kit has risen to the top of her profession and is on the brink of achieving everything she wanted. She hasn’t let anything stop her.

But now someone else is standing in her way – Diane. Best friends at seventeen, their shared ambition made them inseparable. Until the day Diane told Kit her secret – the worst thing she’d ever done, the worst thing Kit could imagine – and it blew their friendship apart.

Kit is still the only person who knows what Diane did. And now Diane knows something about Kit that could destroy everything she’s worked so hard for.

How far would Kit go, to make the hard work, the sacrifice, worth it in the end? What wouldn’t she give up? Diane thinks Kit is just like her. Maybe she’s right. Ambition: it’s in the blood…

Megan Abbott is the award winning author behind the novel Give Me Your Hand. Abbott’s niche is noir fiction. Give Me Your Hand is a prime example of a chilling psychological thriller. With a dramatic shattered glass style front cover, there is an ominous tone to this novel, before you have even read the first sentence. Give Me Your Hand centres on two strong female protagonists, Diane and Kit, who were best friends in high school. A rift formed between Diane and Kit so deep that it has fractured their relationship. Years later, both these highly intelligent and ambitious women will battle it out to reign supreme. What follows is a story of sacrifice, determination, rivalry, jealously, bitterness, secrets and bloodshed. Abbott’s novel has received plenty of praise from fellow authors and has been well received by reviewers across all social media platforms. This is my first experience of Megan Abbott’s writing, I found her prose slick and clear. There were some instances in the lab based sections of the storyline that I felt went way over my head, so you need a good clear mind for these parts.  The narrative itself was slow to begin, but revved up in the second half, complete with a full throttle conclusion I didn’t see coming. The characters are hard to develop any sense of empathy towards, but they are intriguing and well placed.  The primary protagonists offer a good example of highly ambitious women, who are trying to gain the upper hand in a professional male dominated world. Full appreciation goes to the author, Megan Abbott, for putting the spotlight on women in this situation.  I recommend Give Me Your Hand to thriller fans.

Give Me Your Hand by Megan Abbott was published by Pan Macmillan on July 31st 2018. Details on how to purchase the book can be found here.

*I wish to thank Pan Macmillan for providing me with a free copy of this book for review purposes.

2 thoughts on “Book Broadcast: Give Me Your Hand by Megan Abbott”