Book Broadcast is a post I have created to help ease the load of the books I have for review. It is a great way to spread the word, providing recognition to an author or publisher for sending me a book to review. As my reviewing and blogging duties have stepped up a notch in the last year, I don’t often have the time to complete an in depth review. I hope you can discover some new titles to read through this regular book post.

It’s not easy being a good detective – when your brother’s a serial killer. 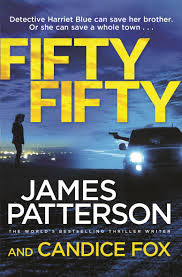 Sam Blue stands accused of the brutal murders of three young students, their bodies dumped near the Georges River. Only one person believes he is innocent: his sister, Detective Harriet Blue. And she’s determined to prove it.

Except she’s now been banished to the outback town of Last Chance Valley (population 75), where a diary found on the roadside outlines a shocking plan – the massacre of the entire town. And the first death, shortly after Harry’s arrival, suggests the clock is already ticking.

Meanwhile, back in Sydney, a young woman holds the key to crack Sam’s case wide open.

If only she could escape the madman holding her hostage . . .

Following my review of Liar Liar, the third book in the Harry Blue series, I had to back track to the second book in the series, Fifty Fifty. The sequel to Never Never, Fifty Fifty was a thrilling read from start to finish. If crime fiction is your bag, then this is a great series to sink your teeth into. Readers are issued with a double whammy in Fifty Fifty. While central protagonist Detective Harry Blue is issued with a complicated case in an isolated township in NSW, she also fights for justice for her brother Sam. Several women have died at the hands of Harry’s brother, labelled as the ‘Georges River Killer’. But Harry is one hundred percent sure Sam is innocent, she just needs to prove who the real perpetrator is. This latest case draws Harry away from her quest to redeem Sam of his charges, so it is up to her former partner to speed things along. Meanwhile, the case in Last Chance Valley (great name) is a ticking time bomb, as a dangerous manifesto threatens to wipe the whole town out. I thoroughly enjoyed my second outing with Mr Patterson and Ms Fox, a writing team that are a force to be reckoned with. With plenty of high octane thrills and page turning stunts, this is an explosive and plot driven crime spree. A side focus on the personal life of Harry Blue injects this plot focussed novel with some much-needed character introspection. Candice Fox’s scent emanates through much of this book, especially in the character dynamics and psychology of the protagonists that appear. While Patterson’s mark appears in the form of the succinct chapters and strong action based scenes. Fifty Fifty is defined by a gritty and isolated Aussie setting, which rounds this novel off well. The ending will leaving you opened mouthed and hanging out for more!

Fifty Fifty by James Patterson & Candice Fox was published on 18th June 2018 by Penguin Books Australia. Details on how to purchase the book can be found here.

Fifty Fifty, is book #91 of the Australian Women Writers Challenge