Title: See You in September 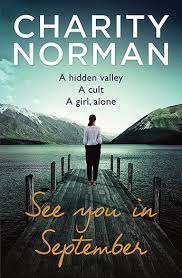 It was supposed to be a short trip-a break in New Zealand before her best friend’s wedding. But when Cassy waved goodbye to her parents, they never dreamed that it would be years before they’d see her again.

Having broken up with her boyfriend, Cassy accepts an invitation to stay in an idyllic farming collective. Overcome by the peace and beauty of the valley and swept up in the charisma of Justin, the community’s leader, Cassy becomes convinced that she has to stay.

As Cassy becomes more and more entrenched in the group’s rituals and beliefs, her frantic parents fight to bring her home-before Justin’s prophesied Last Day can come to pass.

A powerful story of family, faith and finding yourself, See You in September is an unputdownable new novel from this hugely compelling author.

Faith, alternative living, family and guiding relationships form the essence of Charity Norman’s 2017 release, See You in September. This is a novel that completely monopolizes your attention so all you can think about is THIS novel. See You in September puts the spotlight on cults and organised religions, through Charity Norman’s in-depth examination into one British young woman’s experiences of Gethsemane, a New Zealand based farming collective.

Cassy is on the adventure of her life. With her long term boyfriend Hamish, the two have been navigating around one of the most tranquil locations in the world, New Zealand. Cassy is determined to make the most of her trip, before she returns home to the UK for a close friend’s wedding. When Cassy and Hamish have a disagreement, the damage is done and the two break up. Cassy makes an impulsive decision and hitchhikes solo, which leads to an invitation to stay at an exclusive farming collective. Cassy is seduced by the pure serenity of the location and the giving nature of those that populate this close knit community. Cassy decides to break her travel plans and she begins to transition to a new life in Gethsemane, the farming community. While Cassy immerses herself deep in the group’s practices and beliefs, her parents back home are utterly bereft. While they devise plans to bring Cassy home, the powerful leader of Gethsemane, Justin, has a deadly plan for his followers and this includes Cassy.

See You in September signals a return experience to the work of Charity Norman. I was first introduced to Charity Norman’s writing when I read The Secret Life of Luke Livingstone in 2015. This was one engrossing novel that I never failed to forget. Again, Charity Norman produces a highly original storyline focus that sheds a great deal of light on a topic I have read very little about; organised cults and alternative collective forms of living.

I made a rapid connection to Cassy, the intelligent and open British girl at the centre of See You in September. It was easy to see how Cassy felt pressured into a certain way of life, her future decided for her in the opening of See You in September. It is easy to see why she retreated from this pre destined life and chose the enchanting Gethsemane group as an alternative. In today’s society, it is easy to see why the lure of communities off the beaten track may appear attractive. Through this novel we witness Cassy’s complete character back flip. We watch on as Cassy chooses to shun British society and her family, with heartbreaking results.

My knowledge of organised religions and cults is not terribly expansive, but See You in September both broadened my perspective of this topic and challenged the preconceived notions I held. I admire books that have the power to do this. I implore anybody with a passing interest in cults, or different alternative living to consider reading this book. The careful and almost seducing structure Charity Norman takes to this novel seems to cover all bases in the cult corner. We have three shared perspectives. The first is Cassy’s, which covers her recruitment into the Gethsemane doctrine, her transformation and eventual efforts to escape. Secondly, through the point of view of Diane, Cassy’s mother, we are privy to the psychological impacts on a family devastated by the shock exit of their daughter. Norman extends this further and examines Cassy’s father’s anguish and the crisis faced by Cassy’s younger sister. Finally, a third voice in this novel emerges, a manual used by a cult leader. This chilling outside account reveals just what is involved in recruiting and maintaining followers, such as Cassie.

The New Zealand based setting is what really adds to the atmosphere of this novel. I am yet to make it across to New Zealand, I hope to one day. In the meantime, Charity Norman satisfies my desire to discover as much as I can about this country by her climatic prose. The prose perfectly showcases the tranquillity and natural beauty of this part of the world. There is a strong pictorial presence in Norman’s writing, I could easily visualise many of the scenes playing out in this book in my head and could also see it transferred to screen successfully. The hidden valley enclave of Gethsemane is so vividly presented by Norman, it will be sure to leave a stain on your mind.

Readers will find See You in September an evenly paced read that cultivates the reader’s mind for the whole time spent with this book. It is a book that takes a scrupulous look at personal belief, sustainability/alternative lifestyles, forced control, love and devotion. It wrapped me in its arms for the duration of my reading session and I know I wasn’t keen to let go.

See You in September by Charity Norman was published on 24th May 2017 by Allen & Unwin. Details on how to purchase the book can be found here.

To learn more about the author of See You in September, Charity Norman, visit here.

One thought on “Book Review: See You in September by Charity Norman”