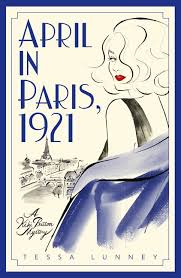 Meet the glamorous, witty and charming Kiki Button: socialite, private detective and spy. We all have secrets – it’s just that Kiki has more than most … For fans of Phryne Fisher and Julian Fellowes

It’s 1921, and after two years at home in Australia, Katherine King Button has had enough. Her rich parents have ordered her to get married, but after serving as a nurse during the horrors of the Great War, she has vowed never to take orders again. She flees her parents and the prison of their expectations for the place of friendship and freedom: Paris.

Paris in 1921 is the city of freedom, the place where she can remake herself as Kiki Button, gossip columnist extraordinaire, partying with the rich and famous, the bohemian and bold, the suspicious and strange.

But on the modelling dais, Picasso gives her a job: to find his wife’s portrait, which has gone mysteriously missing. That same night, her old spymaster from the war contacts her – she has to find a double agent or face jail. Through parties, whisky and informants, Kiki has to use every ounce of her determination, her wit and her wiles to save herself, the man she adores, and the life she has come to love – in just one week.

With such a seductive cover and the promise of a waltz into Parisian life post World War I, with a female lead that echoes the great Miss Phryne Fisher, I couldn’t wait to delve into April in Paris 1921. This is the first instalment in the brand new ‘Kiki Button’ mystery series. I loved the catchy name of the central protagonist, Katherine King Button (Kiki Kangaroo). It was also very pleasing to see an Australian woman lead the charge. What initially began as quite an exciting prospect of a potential new series to enjoy, did serve up some pleasing elements but ultimately it didn’t work for me.

1. The setting; as a HUGE Francophile I adored being transported to my favourite city in the world. Lunney captures to sights, sounds, smells (the food sequences were divine), the fashion, music, art and rich culture that existed in the city at this point in time.
2. The period specific atmosphere; Lunney perfectly encapsulates the mood experienced by the Parisian people and those around the world (even Australians such as Kiki). She expresses the sadness, the immense grief, dislocation, haunted memories of war and the need for those to escape this melancholy. The parties, frivolity, romps, hedonism, extreme drinking, smoking and sex is depicted well.
3. The lead, Katherine (Kiki Kangaroo) King; Kiki is fearless, strong, charismatic and independent. She is also a fantastic fashion icon. Kiki shows us that it a small percentage of women of this era were refusing to conform to expectations of marriage and were indulging in non traditional roles, such working as spies during the war.
4. The name dropping and art sequences. The inclusion of renowned artist Pablo Picasso was an interesting aspect and I loved the missing painting idea.

April in Paris 1921 clearly holds possibility with an exciting, as well as interesting lead, who has an involving back story. The secondary character list was colourful, but very full, designed to keep the reader in their toes. The setting was marvellous and a real literary treat for fans of 1920’s set Paris. There were many narrative threads jam packed into this novel, which I felt wasn’t entirely executed well. I was compelled to persist and read until the end of the novel, as I was invested in the mystery side of the novel, which was mostly resolved, obviously leaving the door open for book two.

Although April in Paris 1921 wasn’t entirely my cup of tea, you can see there were some redeeming features. I was intrigued by this series opener, but I’m not sure I enjoyed it enough to commit to further books to come. I do wish to extend my thanks to Beauty & Lace and publisher, Harper Collins Books Australia for the opportunity to review this new title.

April in Paris 1921 by Tessa Lunney was published on 21st May 2018 by Harper Collins Books Australia. Details on how to purchase the book can be found here.

To learn more about the author of April in Paris 1921, Tessa Lunney visit here.

*Please note that a free copy of this book was provided to me for review purposes through Beauty & Lace and Harper Collins Books Australia. To read the original review on the Beauty & Lace website please visit here.

April in Paris 1921, is book #76 of the Australian Women Writers Challenge