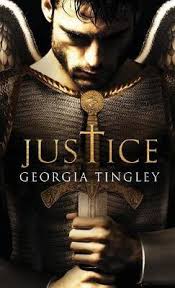 Independence Day, 4th July, 1976 – Thirteen-year-old Christine Conroy mysteriously vanishes from her back yard in a small country town in North Western USA. Folks think Christine has run away to Hollywood as she threatened, but people who know what really happened are determined to hide the truth.

Forty years later, Justice Smith is commissioned to find her body and her murderer – not an easy task after so much time has elapsed. Luckily for him, he has a secret weapon – Justice Smith is a Warrior Angel!

Sent down to Earth to seek justice for those that can’t, Justice uncovers a deadly secret – the bodies of several young girls. A serial killer has gone undetected, living among a small community for four decades.

To complicate matters further, Justice has a mortal connection to the prime suspect’s daughter Andi. He finds himself teaming up with an unlikely ally and while working together to uncover the truth, he crosses the boundary to break the heavenly rules for a forbidden love. Will the price he has to pay be too high?

Justice is the first in the Angel Calling series by Perth based writer Georgia Tingley. A mix of paranormal and crime, this is sure to appeal to readers who enjoy a book that crosses genres. As a fan of the paranormal, Justice hit the spot for me as I delved into the world of angels and demons through the eyes of warrior angel, Justice.

Telling his story in the first person, Justice has come to Maryland, America, to find the body of murdered 13-year-old Christine Conroy who died 40 years ago. I felt like I was in a small, country town as Georgia described a world where dark secrets lay buried until a stranger comes along to shake things up. It was also a world that physically mirrored the values held by Americans today. Touches of Australia through the brief descriptions of Justice’s previous visits to Earth added some Aussie flavour. Unlike other crime stories, Justice, as a celestial being, has the advantage of knowing who the murderer is. He now has to prove it and prove it he does using a variety of talents, which ultimately uncover the death of more than one girl.

Highly intellectual and in touch with his emotions, Justice is a tall man with an athletic physique. Along with his angelic powers, he puts both to good use when need be. He is exactly how I pictured an angel would be; caring, compassionate and loving but, surprisingly, with his own path to follow as he verifies who the killer is. I really enjoyed this part of the journey as Justice comes to learn that Andi is the suspect’s daughter and the role she must play in the upcoming battle. Uplifting yet sad, their relationship is a timely reminder that nobody knows how much time they have on this planet.

While there were times towards the end when I felt uncomfortable with the descriptions of the crimes that had been committed, but ultimately this is an easy way to spend some time in curled up in a book.

Justice by Georgia Tingley was published on March 1st 2018. Details on how to purchase the book can be found here.

To learn more about the author of Justice, Georgia Tingley visit here.