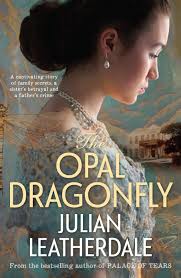 A daughter sacrifices her reputation, two men bid for the love of a woman, freedom is found in the heart of a dust storm, a father’s legacy reveals past crimes.

Inspired by the glamour and beauty of Elizabeth Bay House and the other grand villas of Woolloomooloo Hill in the 1850s, The Opal Dragonfly tells the story of Isobel Macleod, a young woman born into wealth and privilege and yet destined to be cast out of both.

Miss Isobel Clara Macleod, youngest of the seven children of Major Sir Angus Hutton Macleod, Surveyor-General of the colony of New South Wales, had the singular misfortune to know that at seven o’clock that morning her father was going to die.

September, 1851. Sydney, city of secrets and gossip. Seventeen-year-old Isobel Macleod is determined to save her father because she loves him. But when she dares to trespass in a forbidden male world, she will be plunged into social disgrace. A wave of ill fortune threatens to swallow up her family and their stately home, Rosemount Hall, ‘the finest house in the colony’ on the foreshores of Sydney Harbour.

Is Isobel to blame for her family’s fate or does the cause lie further in the past? When Isobel was four, Major Macleod returned from an expedition with two ‘souvenirs’: an Aboriginal girl who became her friend and two opals fashioned into a dragonfly brooch for her mother.

When Isobel inherits this ‘unlucky’ heirloom, she wonders if the terrible dreams it summons are a curse or a gift. Now Isobel’s hopes for her future depend on a charming bohemian who encourages her hidden passion to become an artist. Will she now be permanently exiled from her family home? Or will she be transformed into a new self, like a magnificent dragonfly emerging into the sunlight?

A daughter sacrifices her reputation, two men bid for the love of a woman, freedom is found in the heart of a dust storm, a father’s legacy reveals past crimes.

Inspired by Elizabeth Bay House and the other grand villas of Sydney’s Woolloomooloo Hill, The Opal Dragonfly tells the bittersweet story of an ambitious family’s fall from grace and a brave young woman’s struggle to find her true self.

The Opal Dragonfly, the second novel written by Julian Leatherdale and has been eagerly anticipated by this reader. Leatherdale’s latest book is an intricate Australian saga, with gothic undertones that takes its inspiration from historical architecture, real life figures in Australia’s history books and pivotal events from times past. The Opal Dragonfly promises any reader who selects this tale a finely detailed novel, full of emotion, drama and a richly textured history.

The Opal Dragonfly is a saga that covers the years 1838 through to 1905. When the book opens, we travel to the year 1851. We meet chief protagonist Isobel Macleod, a brave, impetuous and fiercely loyal young woman of seventeen years of age, who is determined to save her father from scandal. This incident has a significant impact on Isobel and her family. Isobel herself is exiled into social disgrace. Soon after this fateful event, the Macleod family become the victims of further misfortune, in the form of ill-health, death and unfortunate accidents. Although the Macleod’s cast their run of bad luck on the youngest of the Macleod clan, Isobel, it seems something more sinister, a gifted opal brooch from the past may be responsible for this spate of misfortune.  Can Isobel and her family break free from this chain of bad luck? For Isobel, the future has the potential to improve, with the help of talented artist, Charles. Despite the terrible dreams that continue to plague her and the opposition of her family, Isobel’s independent spirit seems to soar above it all.

Ever since I read the author of The Opal Dragonfly, Julian Leatherdale’s first novel, Palace of Tears, I have treasured the writing of this talented storyteller. In fact, Palace of Tears has occupied a firm place in my all time favourite novels list. I feel like I have been waiting an age for Leatherdale to bring another novel out. The Opal Dragonfly is finally here and I can safely say it has been worth the wait!

The first thing that struck me about this novel was the attention to detail and the level of research that has been conducted and consequently applied to this novel. It is not easy to trawl through and bring historical facts, figures, people and events to life but Leatherdale does this in an adept manner. I never felt like the historical aspect of this novel was dry. It was completely engaging and grounded very well on real life. Leatherdale possesses the skill to carefully weave historical fact around one wholly engaging narrative. I will say I was completely drawn into this tale from the first paragraph, through to the final sentence.

Colonial architecture fascinates me and I loved that one of the main residences in The Opal Dragonfly is based on one of the most opulent houses in the colony of NSW, back in the 1800’s. Leatherdale notes this on his detailed ‘sources’ section at the back of his novel. This section provided a wonderful after accompaniment to this involving story and further cemented my appreciation for the novel.

Onto characters. The Opal Dragonfly features a great leading lady and heroine of the tale in Isobel Macleod. Her story is equal measures tragic, forlorn, exciting and full. As a lead, Isobel is a character who soon garners your affection. It is hard not to hope that Isobel will rise above and triumph over all the sadness that has come her way. Supporting Isobel are a broad range of secondary characters. Each has their own contribution to the novel, in both positive and negative ways, complete with plenty of intricate character dynamics. This memorable character set includes Isobel’s enigmatic father (also modelled on real life figure Sir Thomas Livingstone Mitchell), siblings, aunt, childhood friend Ballandella and artist Charles Probius. The secrets each of these characters keeps close to their chest and is eventually revealed by Leatherdale’s tantalising storytelling injects the novel plenty of mystery. For me personally, this served to link me to the novel on a deeper level. The insertion of the ill fated opal dragonfly brooch, the centrepiece of the novel, also provides plenty of intrigue to this exquisite tale.

With an expansive and involving plot, despite the size of this novel (500+ pages) my commitment to this story never waned. I basked in Leatherdale’s beautiful descriptive prose, which slotted in so perfectly to this novel. I found the prose and dialogue also accurately reflected the era in which this novel is set. It gave The Opal Dragonfly a strong line of authenticity. Leatherdale is careful in ensuring that he covers the social expectations and moral codes that defined the era presented in the novel.

The Opal Dragonfly is a historical saga with elements of romance. I enjoyed this area of the novel very much and I feel it was presented well by Leatherdale. There is an undercurrent of the forbidden in Isobel’s love story. The introduction of Charles, the bohemian artist who captures Isobel’s heart, adds a secret or two to the fold, while also serving to deliver a couple of shocking plot twists to this superior novel. At the heart of Isobel’s journey in love is the transformation of her character as a whole. Isobel’s soul is tested to its very core and we are lucky as the reader to observe Isobel’s full metamorphosis.

The Opal Dragonfly by Julian Leatherdale was published on February 21st 2018 by Allen & Unwin. Details on how to purchase the book can be found here.

To learn more about the author of The Opal Dragonfly, Julian Leatherdale, visit here.

*I wish to thank Allen & Unwin for providing me with a free copy of this book for review purposes.