Title: Love Your Sister: How Far Would You Go For Someone You Love? 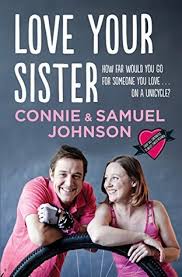 A searingly honest memoir of family, cancer, love … and unicycles by the founders of the LOVE YOUR SISTER charity, Connie and Samuel Johnson, that will inspire and they hope get people talking about boobs!

Born a year apart, Connie and Samuel Johnson have always been close. Faced with the devastating news that they would soon be separated forever, they made a decision.

After already surviving cancer twice in her young life, at 33 Connie was diagnosed with breast cancer. But this time it was a whole different ball game. This time she was told she will die, leaving behind her two sons. As a young mum faced with her own death, Connie wanted to make it all less meaningless, and she knew just the way to do it – send her brother, Sam, on a one-wheeled odyssey around Australia.

The aims: to break the world record for the longest distance travelled on a unicycle. To raise $1 million for the Garvan Research Foundation. And, most importantly, to remind women to be breast aware and stop others having to say goodbye to those they love.

Their message is simple: ‘Don’t fall into the booby trap.’ Samuel has travelled through every state and ridden more than 150,000 kilometres to raise awareness and raise research dollars.

But Connie had a secret fourth aim: to fix Samuel. And it worked. Sam cleared his diary, cleaned himself up and tenaciously kept his promise to his dying sister.

For them the job isn’t over. They are determined to raise more money for research. Connie vows to fight until her dying day and Sam says the fight will go on long after that.

These two remarkable Australians share their tale, from childhood through to the finish line and beyond in this truly unique story. Part memoir, part travel diary, part conversation, LOVE YOUR SISTER is an inspiring and unforgettable story that shows just how far one man will go for his sister.

On Friday 8th September 2017, our nation lost a remarkable and brave woman, Connie Johnson. Connie was  recently awarded an Order of Australia award for her efforts in raising millions of dollars for cancer research, while battling the disease. In 2014, Connie, along with her younger brother Samuel Johnson, co-wrote a book titled, Love Your Sister: How Far Would You Go For Someone You Love? When I heard of Connie’s passing I felt a strong urge to bypass all the review books I had piling up and put this book ahead of the rest.

Love Your Sister is not simply a cancer memoir. It reads as so much more. For me, what resonated most from reading this book were a number of key aspects. Firstly, your family is everything, it is so important to hold them close to you, as you never know what lies around the corner. Secondly, each day should be lived as though it is a gift. Thirdly, don’t fall into the bobby trap and women, check your boobs! If anything, the years and tireless campaigning conducted by the Love Your Sister village is all about early cancer detection, working to raise awareness and save the lives of all women, before it is too late. In light of co-founder of Love Your Sister Connie Johnson’s long battle with cancer, which sadly ended last week, it is hoped that her legacy will continue.

Love Your Sister is a book that moved me, made me cry, shocked and surprised me. It was funny in places and reminded me of the power of Aussie mateship, especially in the face of adversity. Most of all, it was a readable book, while also shedding light on the emotional impact of a terminal illness. The book details Connie’s, along with her well known Australian entertainer brother, Samuel Johnson’s rather difficult upbringing in Melbourne. Deeply honest and revealing, the siblings outline a childhood marked by the loss of their mother at an early age to suicide, their father’s struggle with single parenthood, their constant upheavals in moving from place to place and the bullying they faced. At age 11, Connie was diagnosed with her first stint with cancer. She overcame the disease, only for it to return again when she was 22 and finally once again at age 33. In between Connie’s honest anecdotes about her battles with cancer, she highlights the everyday events that defined her life, including her education, careers, love life, aspirations and her fight for motherhood. Intertwined with Connie’s story is Sam’s perspective, where he expresses his difficulty in dealing with his sister’s mortality, his own personal demons, tragic losses and career highlights. Both siblings are frank with the reader, especially in sharing the times where they were estranged from one another. But the Johnson siblings managed to find a way back to each other via the bond forged through Love Your Sister.

In part two of the book, the reader is given an insight into the inception of the Love Your Sister charity. What surprised me most about this section of the book was the sheer time and manpower needed to get this great idea off the ground. With many hours of tireless campaigning and pitching ideas to big companies for donations, finally the village was born. Outlined in the book is Connie’s wish for her legacy to continue, which saw her request that her brother Sam unicycle around Australia in order to break a world record for the longest distance travelled on a unicycle. Connie hoped that as well as raising awareness about early breast cancer detection, Love Your Sister could also collect over 1 million dollars in donations towards vital cancer research. On a more personal note, Connie hoped that the task she had set for Sam would also give her brother a sense of wellness to repair his own heartbreak and unhappiness. As the book explains, the experience achieved this and much more. I have to admit to enjoying the actual ride Samuel took across Australia. These parts read like a finely tuned travel diary. I loved hearing about the places, people, their generosity and the sheer willingness to get behind this vital cause.

Ultimately, Love Your Sister, is a sad, heartbreaking book but inspiring nonetheless. Connie was a courageous woman and mother who fought so hard to live and save others lives. She leaves behind an incredibly supportive family and village dedicated to her cause. Love Your Sister is a book that reminds us of the unconditional bonds of siblings and families, of the act of giving and the importance of continuing Connie’s legacy.

To learn more about Love Your Sister visit here.

Love Your Sister: How Far Would You Go For Someone You Love? Written by Connie and Samuel Johnson was published on October 28th 2014 by Hachette Australia. Details on how to purchase the book can be found here.

One thought on “Book Review: Love Your Sister: How Far Would You Go For Someone You Love? by Connie and Samuel Johnson”